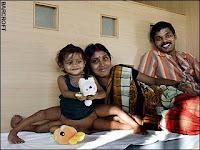 File this under "what if your god answers your prayers."

This morning, a 2-year-old girl had an extensive operation performed to remove the additional 4 limbs she was born with, due to an extremely rare condition known as isciopagus, basically a conjoined-twin type condition where one twin was never fully formed and remained attached to the sibling upside-down from the pelvis, leaving her, in this case, with an unusually symmetrical-looking set of 8 limbs.

This happened, in all places--in India.

For centuries, Hindus have worshiped various gods and goddesses of various things, and the characteristic trait of many of them, as commonly seen in beautiful Hindu art, is their multiple arms. As would be expected, most of the villagers from the girl's region worshiped her as a goddess incarnate.

The girl, named Lakshmi after the Hindu goddess of wealth, who is represented as having four arms, was not expected to live into adolescence. She had been plagued with various internal ailments from birth. The surgery took 27 hours and was done by a team of surgeons taking 8-hour shifts to not only remove the extra limbs but reconstruct her body, including transferring a kidney from her dead twin's body into hers, and completely reshaping her pelvis. The cost was $200,000, thankfully paid for by the hospital's foundation, since Lakshmi's parents are poor villagers from rural India and could not afford medical care.

As well as the obvious difficulties her parents faced in their daughter's many health issues (she had not seen a doctor until this) and simply caring for her, the family had to keep her away from people who wanted to buy her for a circus.

Satan is in the business of twisting all things beautifully designed by God and trying to make us not only believe that they are desirable but to make us worship them. But when the reality is revealed, these "gods" are shown to be as unhealthy, undesirable, dangerous, and--dare we say it--freakish as the one who mutilated them.

Take a look at your gods. If you were to really analyze their nature, what would they be? When the God of Abraham, the Creator of all things beautiful and perfect, was incarnated, what was His character?

Fortunately the girl Lakshmi is doing well after the surgery. I hope that she will be able to live a normal life from now on, learning to walk, play, grow up, and love.

And I hope that the testimony of a girl who was once a "goddess" will live to tell us what these unnatural gods are like when the cloak of mysticism is taken away.