A couple of weeks ago I took a trip to Maryland and Washington DC to visit several friends, see fall colors (for the first time in 5 years...boy, did I miss them), and attend a National Symphony concert.

The first friends I visited were Kyle and Amy, who used to live in Redlands but moved to Frederick, MD this summer. Amy is a violinist and used to be my RSO (Redlands Symphony Orchestra) buddy. I visited with them and their 3-year-old daughter Madilyn for a few days, and we went to the National Aquarium in Baltimore, the zoo in DC, and Harper's Ferry.
(Yes, there was a glass wall between Madilyn and Amy and the sloth bear.) 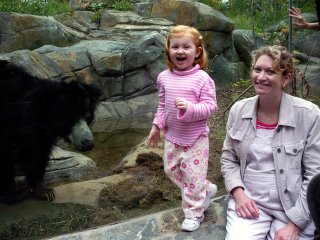 On Sabbath I visited another Amy, with her husband Dan. This Amy is Monica's sister-in-law, who also happens to have been one of my closest friends during my freshman year of college at Southern. We went to the Spencerville SDA church, then to potluck (very similar to the potlucks we're used to here at Advent Hope), then for a walk around a small lake to see more fall colors.

Saturday night I took Amy and Kyle to the National Symphony concert at the Kennedy Center. I was very excited to go because they were playing a piece my friend James Lee composed, called Beyond Rivers of Vision. It was an exciting piece, filled with amazing orchestral colors, using every instrument you could imagine. I'd definitely have to listen to it several more times to catch all the intricacies of it, but it was easy to follow how the themes developed, especially in the first movement. The first two movements were powerful and driving, and the last movement ended in a beautiful, flowing gesture that kind of just disappears into eternity.

But the most exciting thing about James' piece to me was the ideas behind it, and how he had the courage to describe them all in the program notes. The piece is about rivers in the Bible (especially the Tigris) and the prophets associated with them (Daniel), also the great river that flows from the Throne of God (he mentions Rev. 22:1-5 in the program notes!). Here's a little quote from the notes: "It is, however, the deep and sincere importance of the vision received that takes precedence over the location of the particular river." He goes on the explain how the visions deal with eschatological subject matters, then says, "we must look beyond the rivers themselves and study the vision." Then he quotes Gen. 2:10-14; 3:7, 24; Daniel 10 (especially vs. 1-6); and Rev. 22:1-5. All of this for an audience of several thousand in a major concert hall in America's capitol city. Go James!! (I'd recommend reading the entire program notes.)
Posted by Stephanie at 7:33 AM