This title is a bit misleading--actually, there is really no such thing as springtime in Southern California. In the East, where I come from, Spring is a magical time after months of barrenness when all green things spring to life at once, within a week, transforming the landscape from a dead wasteland to a verdant, luxurious forest. In California, each tree decides on its own when Spring will be (if it loses its leaves at all). However, there are two seasons here--I would name them the Growing Season and the Non-Growing Season. In the chilly months, not much happens in the garden. Then there is a time when all the plants decide to make up for lost time during December through April by doing a whole year's worth of growing at once. That season started this week. (Unfortunately, most of this "Spring" growth applies to weeds.) 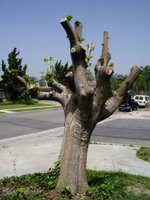 One notable exception to the non-deciduous landscape is my mulberry tree, formerly a beautiful, spreading tree which provided shade to my entire lawn. It loses its leaves every year, but this year it lost more than leaves. Here it is, again beginning to show signs of life after experiencing a major trauma a few months ago. (We miss you, tree!) 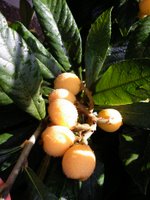 Loquats for sale! All you can pick! Actually, loquats for free! Hey, take the whole tree if you want. Monica constantly threatens to chop it down anyway (so it's not the favorite tree around here...) For those friends out East who may not be aquainted with loquats, they are stone fruit a bit like apricots, but somewhat more rubbery and much less tasty. 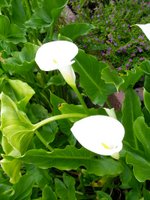 The calla lilies are on their way out, but still have a few nice blooms. The roses have also re-emerged after a serious pruning. 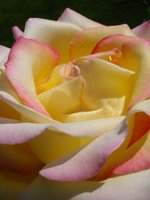 The villains of the garden are the Huge Scary Weeds. I don't know what their real name is, but Huge Scary Weeds is descriptive enough for me. They are in the process of taking over the lawn. Perhaps the like the extra sun that the mulberry previously blocked out (and now that it is but a stub, alas...sigh....) I think the Huge Scary Weeds grow a half a foot a day. 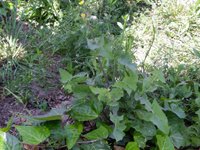 This picture is of what should be my front lawn.
Posted by Stephanie at 1:30 PM

I love the rose picture. It's beautiful! I feel like spring has already come and gone -- it's too hot for me already. All I am craving is the swimming pool :)